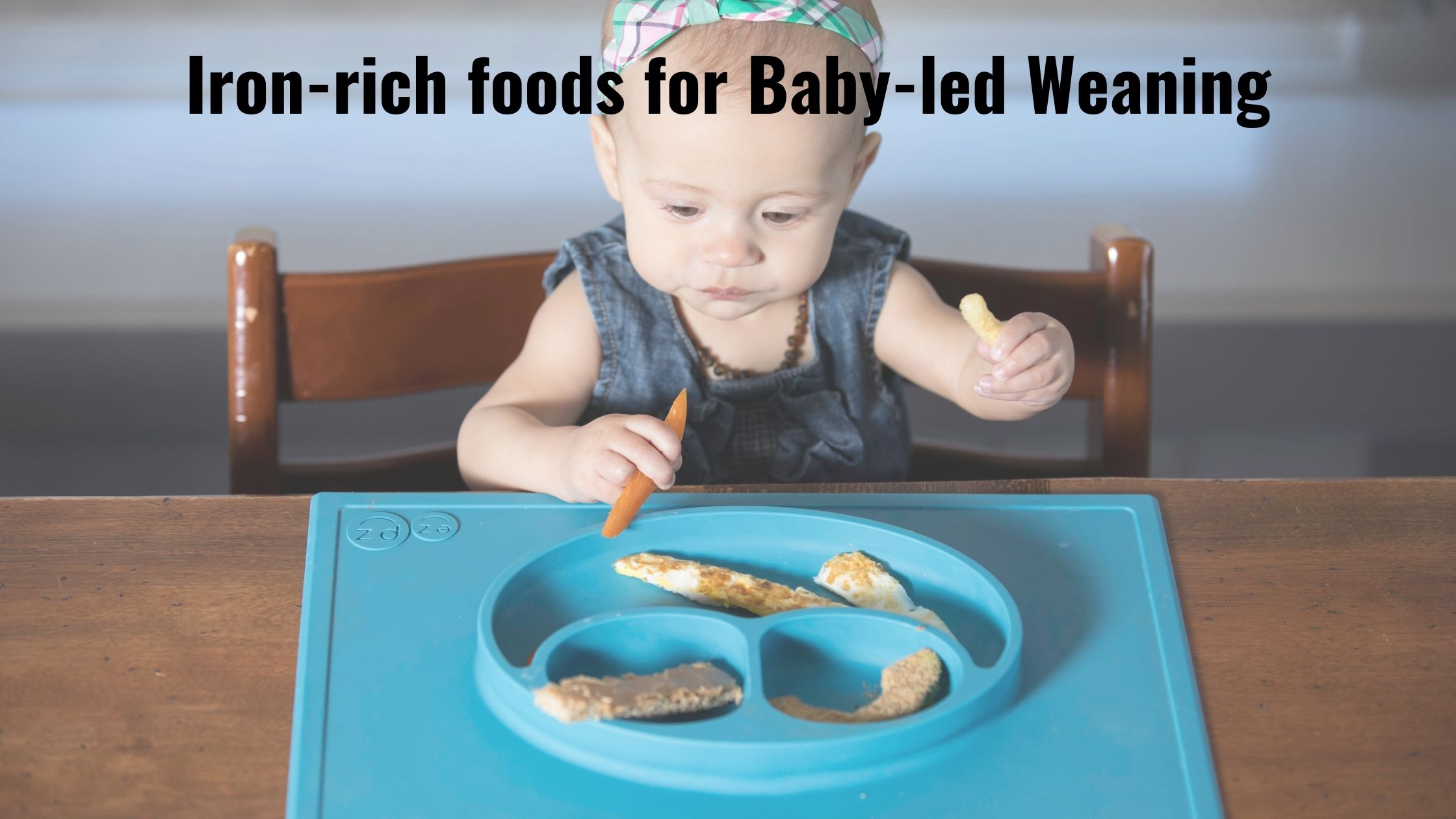 Are you starting your baby on solid foods with Baby-led Weaning?

Great, there are lots of benefits to baby-led weaning (BLW)! But one of the main concerns health professionals have is the perceived challenge of feeding your baby critical nutrients.

In this blog, I’ll share why iron is so important for your baby’s development how much your baby needs and tips to make sure your baby gets enough iron-rich foods when starting solid with BLW.

Let’s dive into this guide to iron foods for babies.

Why is iron so important for baby?

This mineral is essential for body and brain growth, and deficiency is not uncommon.

One Canadian study tested 8 to 15-month-olds for blood levels. They found 33.9% had iron deficiency and 4.3% had anemia (more severe deficiency).

One out of 3 of my kiddos was iron deficient. I didn’t find out until she was 4 years old and I believe it affected her growth. That could be why she’s significantly shorter than the rest of our family!

Risks of iron deficiency anemia include irreversible physical and mental effects, like delayed attention and social withdrawal. So it’s always a good idea to test your baby’s levels around 12 months, and a supplement will be needed if they are low.

Is my baby at risk for iron deficiency?

From birth to 6 months, babies survive with their stores of iron built up during pregnancy. By 6 months, your baby’s stores from before birth start to run out. The amount of stores your baby has will depend on:

1. Mom’s blood iron levels in pregnancy. If the mom had low levels while pregnant, the newborn is more likely to have smaller iron reserves.

2. Gestational age at birth. Most of the babe’s iron stores are built up in the third trimester of pregnancy. Premature babies don’t benefit from this extra time to build full stores so many of them require supplements. Finally, ONE benefit to those extra 17, 9 and 9 days I was “overdue” with my three babies!

How much iron does my baby need?

Odd thing is, recommended intakes vary depending on where you live! In Norah America, the recommended intake is 11 mg per day from 6-11 months of age. As one comparison, the United Kingdom recommends an iron intake of 7.8mg/day for a 7-12-month-old.

The North American number is the recommended daily allowance (RDA) value set by the United States and Canada. The RDA is a “level sufficient to meet the nutrient requirements of 97 to 98% of healthy people within each age group.

Animal and plant-based sources aren’t absorbed equally. Heme iron from meat is absorbed 2x that of non-heme, found in fortified or non-meat (fortified & plant sources). More on that later…..but if you offer your baby heme iron, then 11mg a day is a bit of an inflated goal.

Signs of iron deficiency in your baby

If you’re worried that your little one isn’t getting enough iron, here are some signs and symptoms of  deficiency you can watch for:

With my daughter, I noticed her hair was quite thin and fell out fairly easily. Apparently this is a sign too!

To prevent anemia, the American Academy of Pediatrics actually recommends that all 12-month-olds have a blood test to check their levels. If you’re worried about your child’s iron intake or they have some signs of deficiency, you’ll definitely want to take them to the doctor and request a test.

If levels are quite low, you will need to give your child a supplement for a few months. Food alone is unlikely to be enough to bring them up to normal.

Can Baby-led Weaners get enough iron?

Is it even possible to get adequate amounts of iron when using BLW? To find out, the Baby-led Introduction to Starting SolidS (BLISS) study looked at this. Two hundred families from New Zealand were split into either the BLISS group compared to a control group.

BLISS babies were taught to avoid choking, growth faltering and how to get enough iron-rich foods when self-feeding. They were encouraged to offer at each meal:

One of the studies published out of the BLISS trial was titled “Impact of a modified version of baby-led weaning on iron intake and status: a randomized controlled trial.” Weighted 3-day diet records were used to look at nutrient intake at 7 and 12 months of age. And a blood sample at 12 months was used to analyze the babies’ iron status.

Results found that 83% of babies in both groups had adequate iron levels, although 5% control and 7% BLISS had anemia. And there was no difference between the two groups at 7 or 12 months when comparing iron levels and stores. Or in iron intake from the diet, which was an average of 3mg per day at 7 age months and 5mg at 12 months (waaaaay below RDAs of 11mg).

This is great news! With some extra education about how to safely practice BLW, it can be a nutritious and safe method to start solids.

While your baby’s main source of nutrition will still be breast milk or formula, it’s important to start getting iron from solid foods around 6 months. There are two types of iron present in food:

Heme iron is found in meat and fish. People usually absorb about 15 – 35% of the heme iron from food. This varies depending on your iron levels (you absorb more if you’re low). And dietary inhibitors (likes phytates) and enhancers (such as vitamin C).

Note: While liver is a great source of iron, it contains too much preformed Vitamin A, which could be toxic. The Upper Limit recommended for ages up to 3 years is 600 micrograms. Just 1 oz of liver contains over 5,000 micrograms. Plus, the liver is the filter for our body, and it can also contain metals.

How to serve heme-iron to baby:

These are found in plants. Absorption levels are lower than heme-iron and will vary from about 2-5%.

How to serve non-heme sources to baby:

Where do parents go wrong when starting solids with Baby-led Weaning? It’s super-common to just offer fruits and veggies. And while nutritious, they don’t have enough calories or nutrients to be your baby’s main source of food (beyond breastmilk).

One good thing about fruits or veggies is that eating vitamin C along with an iron source will boost absorption. You can find Vitamin C in fruits and veggies, such as citrus, berries, broccoli and bell peppers.

Tips to get enough iron for baby-led weaning

The official position of the Dietitians of Canada and American Dietetic Association is that:

Of course the wider the variety of foods you can offer your baby, the easier it is to meet their nutritional needs. And there are some additional nutrients (omega-3 fats, zinc, calcium and vitamin B12) that you have to pay attention to when offering only plant-based foods. I have more information about this in my book The Parents’ Guide to Baby-led Weaning.

The American Academy of Pediatrics advice is that babies take a dietary iron supplement starting at 4 months of age. And while this isn’t a worldwide recommendation, you may want to ask your doctor if she thinks a supplementation would be beneficial for your vegetarian baby.

Iron isn’t absorbed well from plant sources. That’s why it’s especially important for vegetarians and vegans to pair a source of iron and foods with vitamin C at each meal.

And make sure to focus on offering an iron source at every meal like eggs (for ovo-vegetarians), tofu, edamame, beans, lentils and hemp seeds.

Ways to use fortified infant cereal when baby-led weaning:

How does this all come together? Check out the meal plan below for an example of iron-rich meals for babies.

I’ve only included 2 meals per day and they are friendly for a baby with a “palmer” grasp, to make this meal plan beginning BLW-friendly. You can see in the sample meal plan below that I’ve included a source of iron and source of vitamin C at each meal. Starred recipes are from my book “The Parents’ Guide to Baby-led Weaning.” Bon Apetit baby!

Want to learn more about Baby-led Weaning? Check out my free BLW webinar.