The when & how of introducing peanuts & allergenic foods to your baby 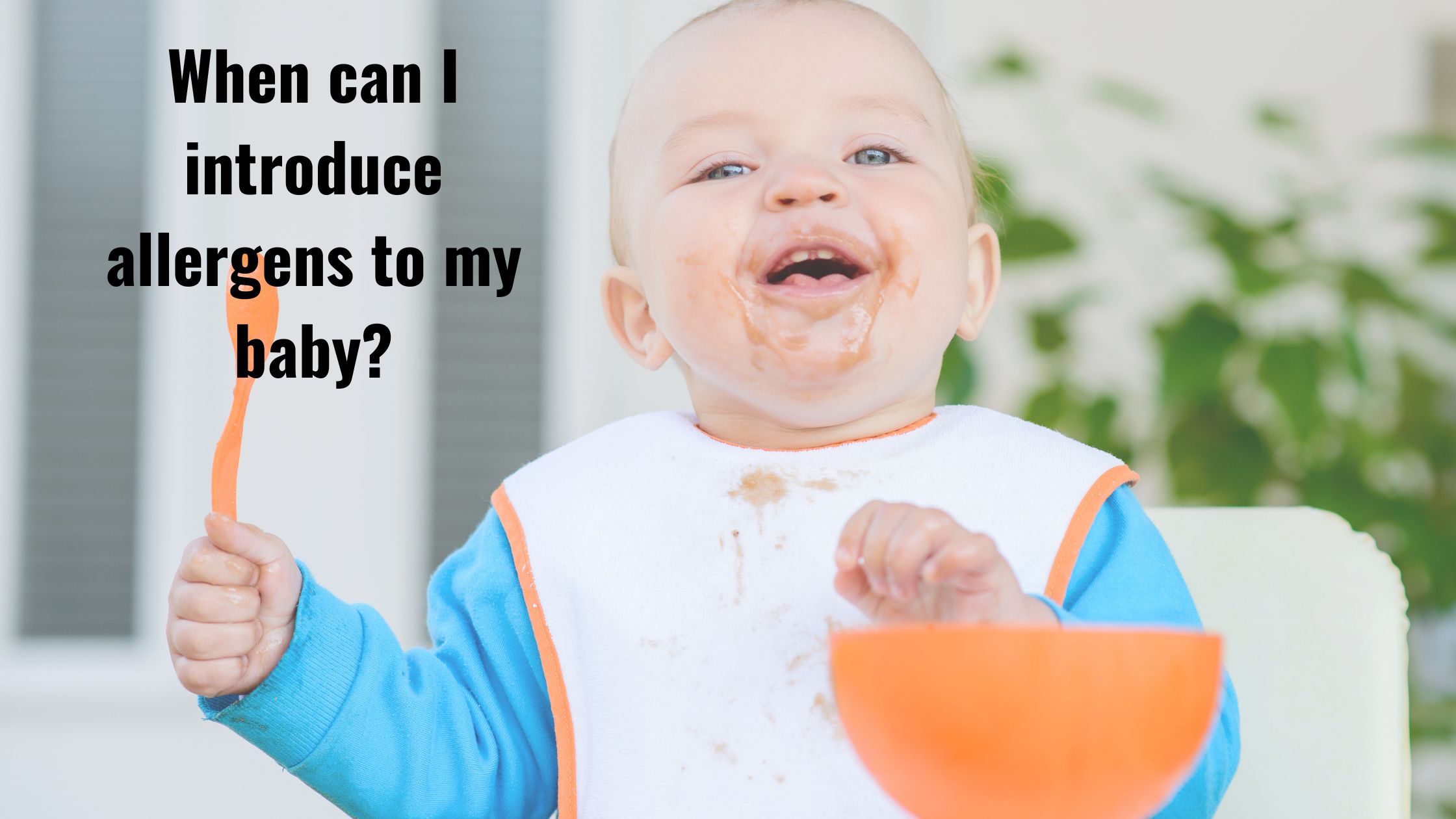 The when & how of introducing peanuts & allergenic foods to your baby

Was your doctor adamant that you need to introduce peanuts to your baby at 4 months old, but your best friend warned you to wait until a year and your health nurse is confident that 6 months is the best age?! Conflicting health advice is frustrating and confusing.

The “big 8” allergens include peanuts, tree nuts, eggs, wheat, fish, shellfish, dairy, and soy. Not everyone (including health professionals) is up to date on the latest guidelines for introducing them to your baby. But after reading this blog – you will be!

The latest peanut introduction recommendations are from the National Institute of Allergy and Infectious Diseases.

For low-risk babies or babies with mild or moderate eczema, start introducing peanuts when your baby’s developmentally ready to start solids. This will be around six months of age, and shortly after introducing other solids for the first time.

But for babies at high risk of allergy (defined as having a known egg allergy or severe eczema or both), the baby should be allergy-tested for peanuts first. If they have a mild allergy, peanut introduction at home or the doctor’s office might be recommended. If they have a more severe allergy, your allergist and pediatrician will provide individualized guidance (to avoid peanuts, most likely).

One new guideline is for high-risk babies to start peanut protein “as early as four to six months.” Where did this four-month guideline come from? First, let’s share some history…

Peanut introduction recommendations have changed a lot. In 2000, the American Academy of Pediatrics and other health organizations said to wait until age three to introduce peanuts. Unfortunately, this led to skyrocketing allergy rates. Whoops.

Come 2008, most professional health organizations started changing their stance to: “there’s no benefit to delaying high-risk allergens beyond six months.” This change was instigated by a United Kingdom study called the Learning Early About Peanut (LEAP) Study.

The authors in the UK began the LEAP study because kids in the UK had 10 times the rate of peanut allergy compared to kids in Israel. One difference was that the UK recommended avoiding peanuts for the first few years of life. And in Israel, babies started eating peanuts at an average age of seven months. And the Israelites had basically zero peanut allergies.

The LEAP study authors took 640 babies at high-risk for peanut allergy and split them into two groups.

At the end of the study, 17.2% of the avoidance group had peanut allergies compared to 3.2% of the early group.

This helped solidify the knowledge that introducing peanuts earlier can prevent allergies.

Could starting peanuts early be potentially beneficial to start before six months for high-risk babies? I would argue that the current evidence doesn’t show that. Yet. Maybe one day soon it will. If you want to know more, check out my blog post: “Pros & Cons of Starting Solids at 4 months vs 6 months of age.”

Currently, recommendations are to exclusively breastfeed until six months and to start solids around this time, when your baby’s showing developmental readiness. Even if you have a baby at high-risk, starting peanuts around six months still fits within “as early as four to six months.” Unfortunately, many misleading news clips said to introduce allergens by six months. And for all babies.

What kind of peanut protein can I feed my baby?

Feeding baby peanuts for the first time strikes fear into a new parent’s heart. After choking, it’s the biggest concern I hear from moms when starting solid. Remember not to delay peanuts -starting them early on in your baby’s eating journey is protective and healthy for them.

One important thing to know is void feeding a plain spoon of peanut butter. It’s too thick and is a choking hazard. There are lots of other options for offering peanuts to babies. If you’re spoon-feeding purees offer 2g of peanut protein via these options:

How do I feed peanuts to my baby?

What about introducing other allergens when starting solids?

You can feed the yolk and white any time after six months. You don’t have to offer them individually, but you can for a high-risk baby. It’s possible to have an allergy to the white and not the yolk (or vice versa) as they contain different proteins.

If you’re doing baby-led weaning, fry an egg up and slice it into strips. Once your baby has a pincher grasp, you can offer smaller pieces of scrambled egg.

Full-fat yogurt and cheese (bocconcini is my fave as it’s soft and low-sodium) are fine at 6 months. Full-fat milk in cereals and smoothies or as an ingredient in a dish ok too. But wait to introduce full-fat milk as your baby’s main source of milk until nine to 12 months. Because it’s low in iron and other nutrients you find in breast milk or formula.

Foods to avoid for your baby

Honey can contain botulism so wait until after a year of age to offer it to your baby.

Foods that are at a higher risk for foodborne illness like raw meat (including sushi) should also not be introduced in the first year of life.

Lots of added sugar and salt aren’t great for your baby either of course. In Canada, we don’t have guidelines for sodium intake under a year of age. In the UK they recommend <400mg added sodium per day for 6-12 month-olds.

Summary: Introducing peanuts and allergens to your baby

For low-risk (or higher-risk babies who have been recommended to start peanuts at home), you can offer peanuts and other allergens shortly after starting solids around 6 months of age. Feeding 2g of peanut protein (about 2 tsp) multiple times per week may prevent an allergy. So you can thank that health nurse for offering you the best evidence-based advice 😉