Choking and Baby-led Weaning: How to prevent it Choking and Baby-led Weaning: How to prevent it

But it’s normal that the first few times you offer your baby solid foods, they will gag. This can strike fear in your heart that they can not handle real food and are going to choke!

In this post, we will discuss whether the research says about baby-led weaning and choking and share tips to prevent it from happening.

One benefit of BLW and introducing “real” foods sooner, is that your baby’s gag reflex is further forward in the mouth. It moves back as your baby ages.

So rest assured that if your baby is super-gaggy to start, this will decrease with time!

Gagging is actually protective against choking. It’s normal and not dangerous.

Gagging is a part of the learning to eat process for many infants. It just brings the food up to chew a bit more before going back down. This way, only well-chewed foods are allowed to the back of the throat to be swallowed.

Check out my video talking more about gagging vs choking here.

With choking, on the other hand, your baby won’t be making any noise, as their air pipe is blocked. So you can consider those loud gagging noises a good thing!

When your baby can’t get oxygen, they can’t breathe and their lips and face will start to turn blue. This is when you need to start the Heimlich maneuver for your baby.

Taking an infant CPR course will give you more confidence that you know what to do in the unlikely case this does happen (note: this is an affiliate link to Tiny Tot’s online CPR course).

Does baby-led weaning increase the risk of choking?

Many proponents of baby-led Weaning (BLW) believe babies are actually at less risk of choking if they feed themselves rather than being spoon-fed by a parent. This is because the baby is in full control, at a time when they have a sensitive gag reflex.

There have been two recent studies analyzing the risk of choking when using Babyled Weaning to start solids.

One study came out of a Randomized Control Trial in New Zealand called “BLISS” (Baby Led Introduction to Starting Solids).

It was published in the “Pediatrics” journal and titled “A Baby-led Approach to Eating Solids and Risk of Choking” This study included 206 families.

The parents answered questionnaires when their baby was 6, 7, 8, 9 & 12 months old. Questions included frequency of choking and gagging. Those who reported choking were asked some follow up questions about what the child was fed and how the choking was resolved.

A total of 35% of babies choked at least once between 6-8 months old. There was no difference between the two groups in incidences of choking at any of the time periods.

Those that started with Baby-led Weaning gagged more often at 6 months, but less by 8 months. The puree group was gagging more by 8 months than the BLW group (because they were now learning to eat finger foods too).

Of the three incidences of choking in which health care help was required: 2 babies choked on milk and 1 choked on food that was placed in their mouth by a caregiver (not recommended with BLW). This goes to show that it’s possible to choke on anything.

The researchers found that choking hazards were frequently offered in both groups. Not all parents stayed close to supervise their baby.

They also cautioned the results shouldn’t be extrapolated to unmodified versions of baby-led weaning (as the BLISS parents received extra education on BLW, including preventing choking).

The other study was published in 2018 by Amy Brown, titled “No difference in self-reported frequency of choking between infants introduced to solid foods using a baby-led weaning or traditional spoon-feeding approach. “

Dr. Brown surveyed 1151 moms with infants between 4-12 months old. The moms reported how solids were introduced (strict BLW, loose BLW or traditional weaning) and percentage of mealtimes that included spoon-feeding purees to baby.

Moms also reported if their baby had ever choked, and if so how many times and on what type of food (smooth puree, lumpy puree or finger food).

The results found that 13.6% of infants (or 155 babies out of the group of 1151) had choked. No significant association was found between the style of starting and choking, or the frequency of spoon or puree feeding and choking.

But one interesting finding is that for infants who had choked, those following a traditional weaning approach experience significantly more choking episodes on finger foods and lumpy purees than infants following either a strict or loose baby-led approach.

This is likely because the spoon-fed babies had less practice with finger foods. I find this a good reason to introduce finger foods from the start, whether you use purees of not.

Health Canada and the National Health Services (in the UK) also recommend this combo method of starting solids, including both finger foods and purees from the start.

Choking is a risk, no matter how you start solids. But there is a lot you can do to prevent choking.  Here are some tips:

Never put a piece of food into your baby’s mouth. If you put food into their mouth, it may immediately fall to the back, without baby having a chance to control it with their tongue and chew it.

2) Always watch your baby while they eat.

Remember, choking is silent. And sitting down to eat with your baby is one of the benefits of Baby-led Weaning anyways!

If food does happen to get past the gag reflex and cause your baby to choke, they will be much more likely to cough up a soft food.

So steam fruits and veggies and test the foods to make sure you can mash them with your tongue on the roof of your mouth.

If the food is harder, it’s especially important to make sure it’s in a safe shape (i.e. grated or sliced thinly).

Baby’s air tube is about the width of a straw. So we need to avoid round items, which could totally block the air tube.

Slice foods thinly, if possible. I like to picture a potato-chip shape, which works well for foods like apple, sweet potato, beet, cucumber or large carrots for example. If you have a mandolin, this is a perfect tool to use!

5) No distractions during meals.

Don’t have toys to play with or the TV on during meals, as a distracted baby is more likely to choke.

Use a proper high chair. I preferred not to buckle the high chair (unless there’s a risk of your baby falling or climbing out). That way you can get them out quickly if needed.

Your baby should be well supported in their high chair. If they are leaning to one side or too low, roll up towels to support your baby. The tray (or table) should come between their nipples and belly button. Their feet should sit on a footrest. 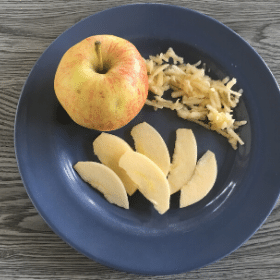 Here is a list of foods that are at higher risk for causing choking when starting solids. And how to serve them safely.