Bone broth for babies: Is it a healthy starter food? 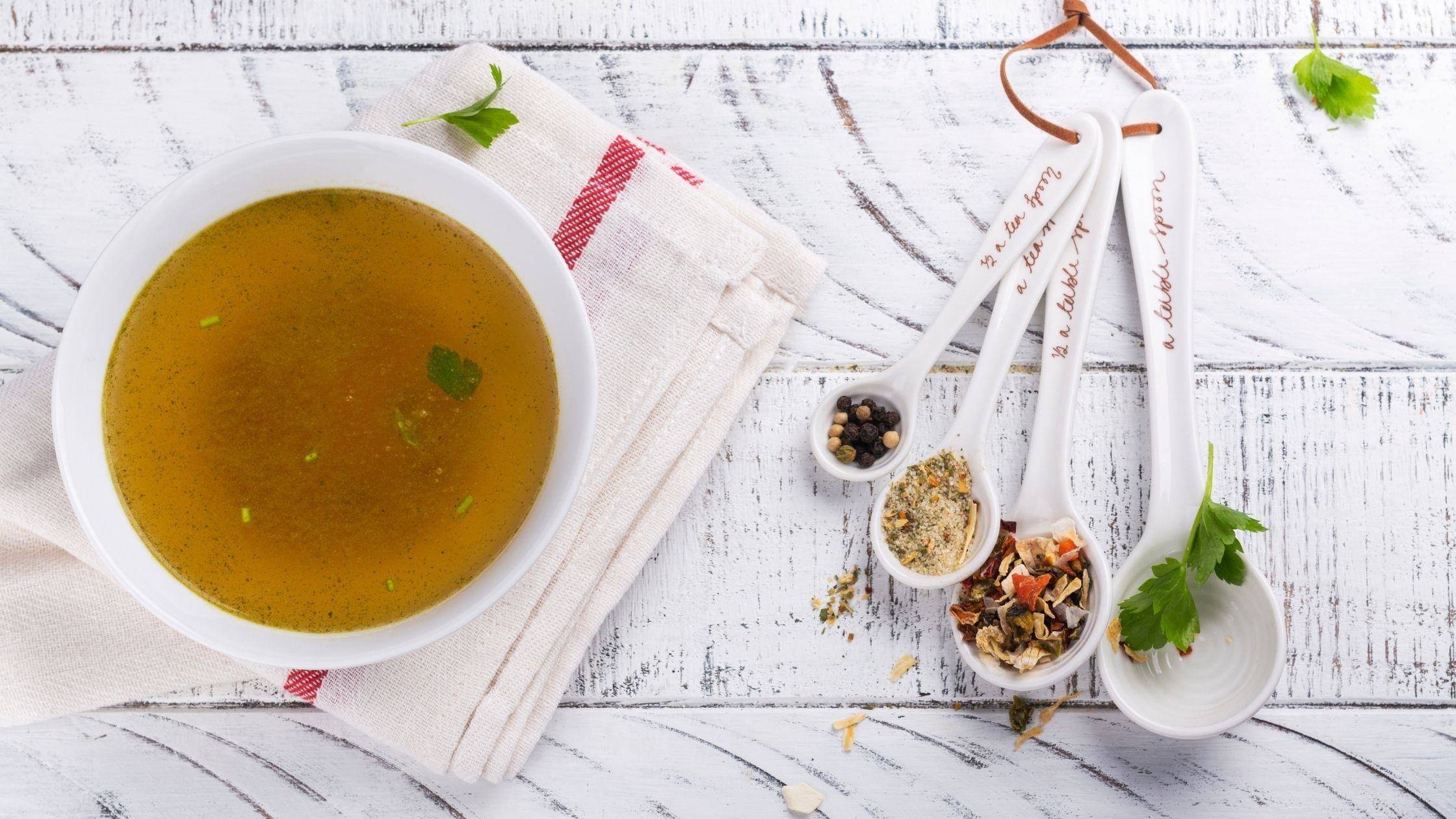 Bone broth for babies: Is it a healthy starter food?

What is bone broth?

Bone broth is made from bones and sometimes the meat, skin and connective tissue/cartilage of an animal. The bones (ie. beef, lamb, pork or chicken) are simmered with a bit of acid like apple cider vinegar to break down the bones, along with water and desired vegetables and herbs.

It’s strained and can be used in soups or just consumed as a drink.

Beef broth at trendy restaurants and juice bars now. But does it stand up to the health hype and is it safe to feed your baby?

What are the health claims?

Apparently, it heals the lining of the gut and is reported to make great first food for babies. Even fed straight out of a bottle, according to ‘nutritional consultants’ of some sort online.

Funny enough, even though bone broth has been around forever, there is very little research to support any of these claims really. The one study I found showed the potential anti-inflammatory properties of bone broth. Its consumption by mice decreased symptoms of Ulcerative Colitis.

And one study on chicken soup showed anti-inflammatory properties that may help colds. Maybe Grandma was right 🙂

There’s actually more research on the potential risks of bone broth than benefits! But just because there’s no research, doesn’t necessarily mean there are no benefits. Just that it hasn’t been studied. What we know is that bone broth benefits for babies may include helping cure a cold.

There’s a lot of dairy-hate these days. Some parents want to feed their babies almond milk or bone broth instead. Unfortunately, these substitutes don’t contain the fat, protein and micronutrients that whole milk does.

Note: Under one year of age (or 9-12 months in Canada), human milk or infant formula are the only nutritious options.

Another health claim for broth is that it’s high in calcium and therefore can replace milk in the diet. However, the one study I found determined that the amount of Calcium and Magnesium in broth was extremely low – tenths of a milligram. As a reference, a 1 to 3-year-old child should get 700mg of calcium per day.

The longer the bones are cooked, the higher the calcium content of bone broths. But it’s still likely not a substantial source in the diet.  0.4mg in a cup of broth can’t quite replace 300mg in a glass of milk. Sorry.

Are there dangers to bone broth for babies?

Bones can be contaminated with lead and other heavy metals. Low levels of lead can be harmful to children especially, as their bodies are so small. It can affect the brain and nervous system, leading to learning disabilities among other negative developmental effects.

The chicken bone broth including skin and cartilage had a lead concentration of 9.5 ug/L, and the broth made with just bones contained 7.01 μg/L. The control cold water contained 0.89 ug/L.

The US Environmental Protection Agency recommends a maximum intake of 3 μg/day of lead for children to avoid negative effects. So looking at the above numbers in the chicken broth, 2 cups of bone broth per day would put them over this limit.

There are rebuttals to this study which argue that while the chicken was organic, we know nothing of their feed and how high it was in lead. I’m not sure how you’d know that about any chicken bones you purchased to make broth. Organic bones or not.

Perhaps some other broths are lower in lead, but it’s something to consider. Everything in moderation!

How do I introduce broth to my baby?

When your baby is ready to eat solid food around 6 months of age, meat stock could be a great addition to water down a puree if you’re making your own purees. I recommend using pumped breast milk if you have it, but bone broth is more nutritious than plain water. Make a batch and freeze it in ice cube trays.

I wouldn’t recommend feeding broth as a beverage to your baby. Stick to breastmilk or formula and a bit of water until 1 year of age. You could substitute the water for a small amount of broth in an open cup (1-2oz).

But keep in mind we don’t want to fill your baby’s stomach with broth when it could be filled with more nutrient-dense baby food or fluid, so limit the amount offered. And remember that lead contamination may be a reason to limit broth intake for your baby too.

For serving bone broth for kids – use your homemade chicken stock or any meat broth to make a soup! There’s nothing tastier than homemade soup on a cold day, or soothing when you’re sick in bed.

Overall, I think bone broth doesn’t stand up to the trendy fad diet hype. It’s not a nutritious milk replacement for your baby. Small amounts likely won’t hurt much but likely won’t benefit much either.